Our shnattim are getting into their sort-of-routine- going to different volunteering placements, getting to know the kids they work with, learning Hebrew, budgeting, shopping, cooking and recovering from illnesses.

On Wednesday, only the brave ones, went on an adventure called Rafsodia- this is a two day activity in the Sea of Galilee, where you build a raft the first day, and on the second day, sail it to the other side of the Kineret Sea. This year the activity was sponsored by the JNF-KKL and hosted over 700 participants- all from worldwide Zionist Youth Movements! Very proud of Tilda, Abe, Mili and Adam M. for taking part in this huge experience. And of course- the AMAZING JADE- our madricha!! 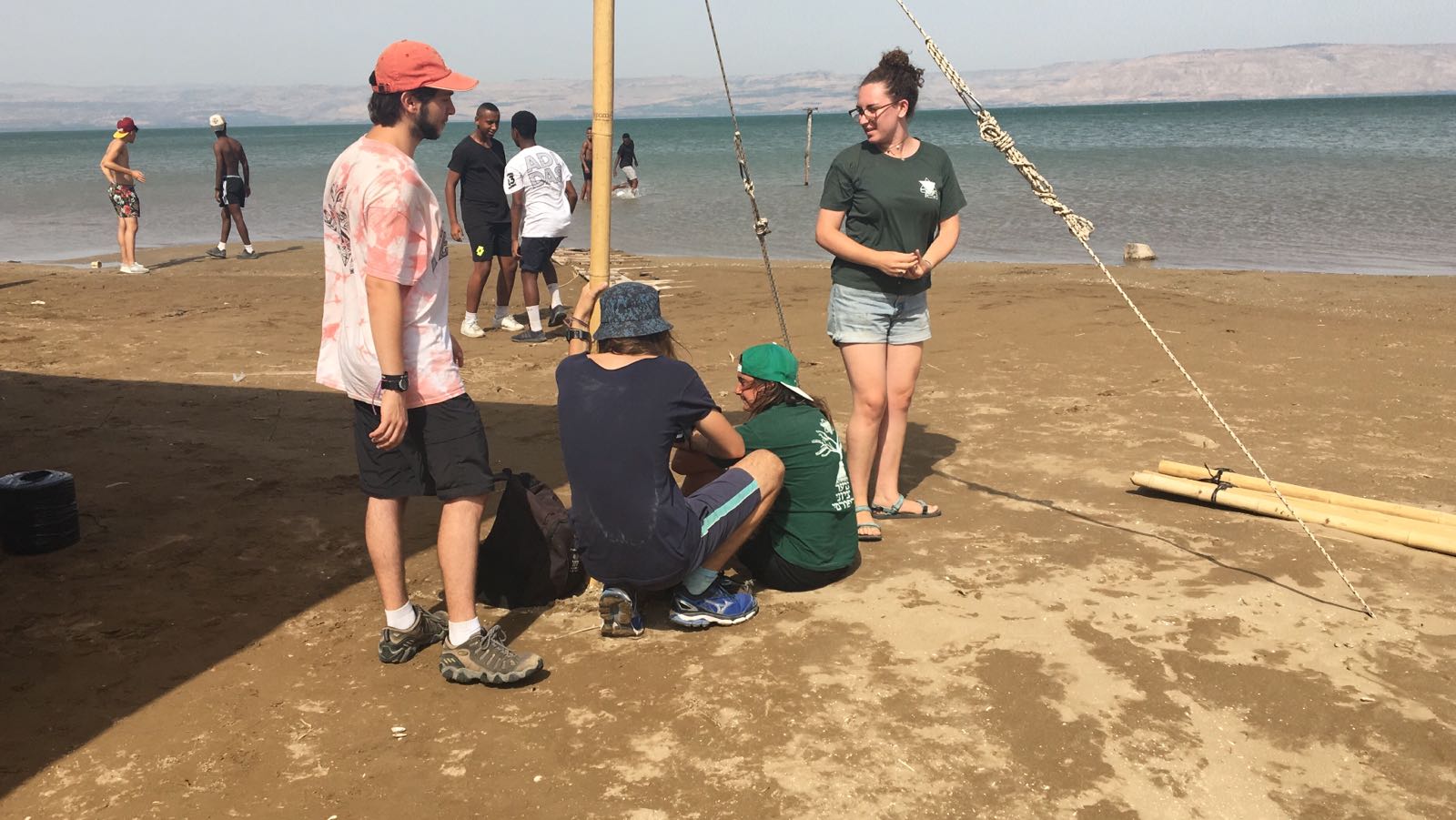 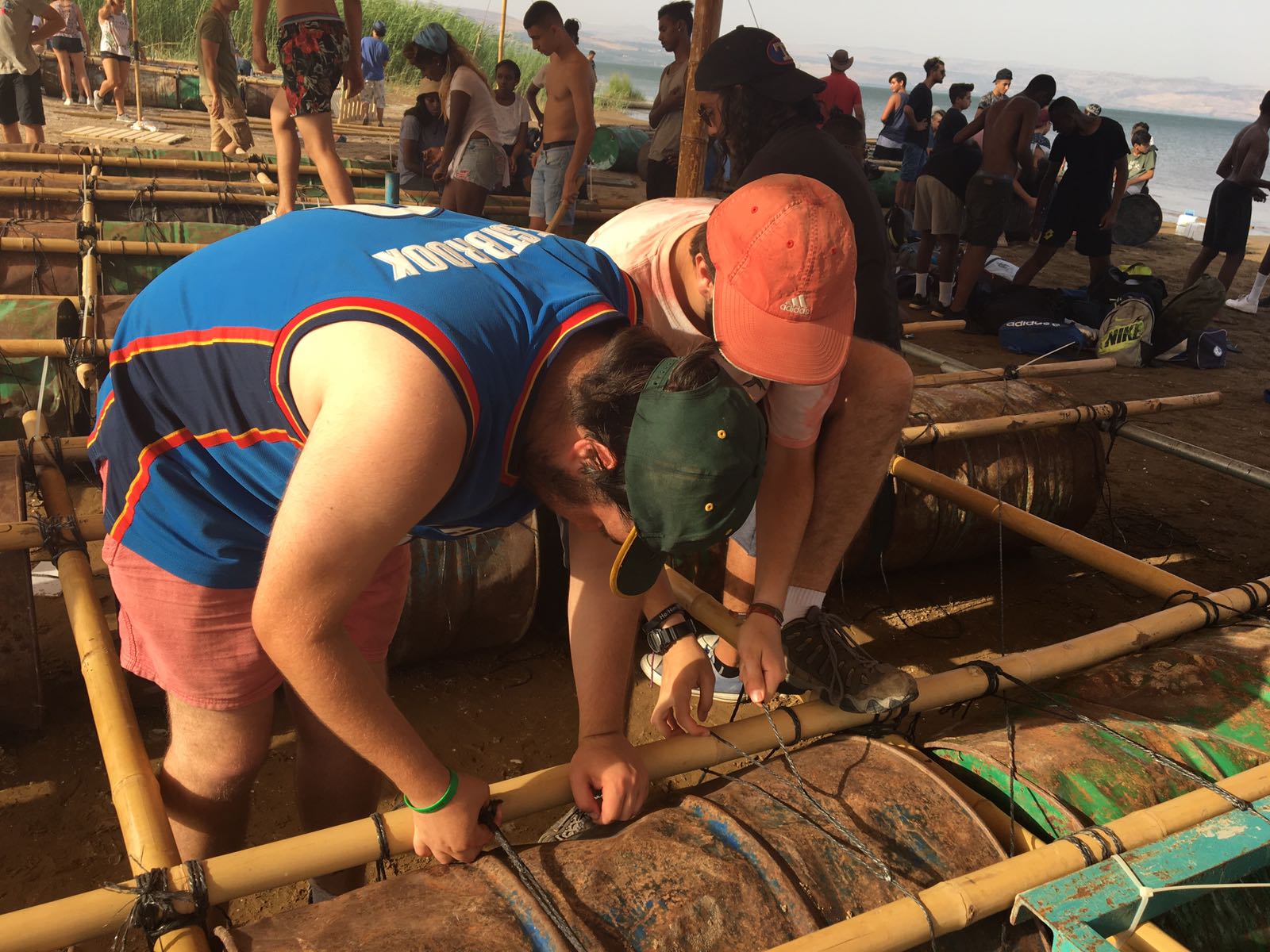 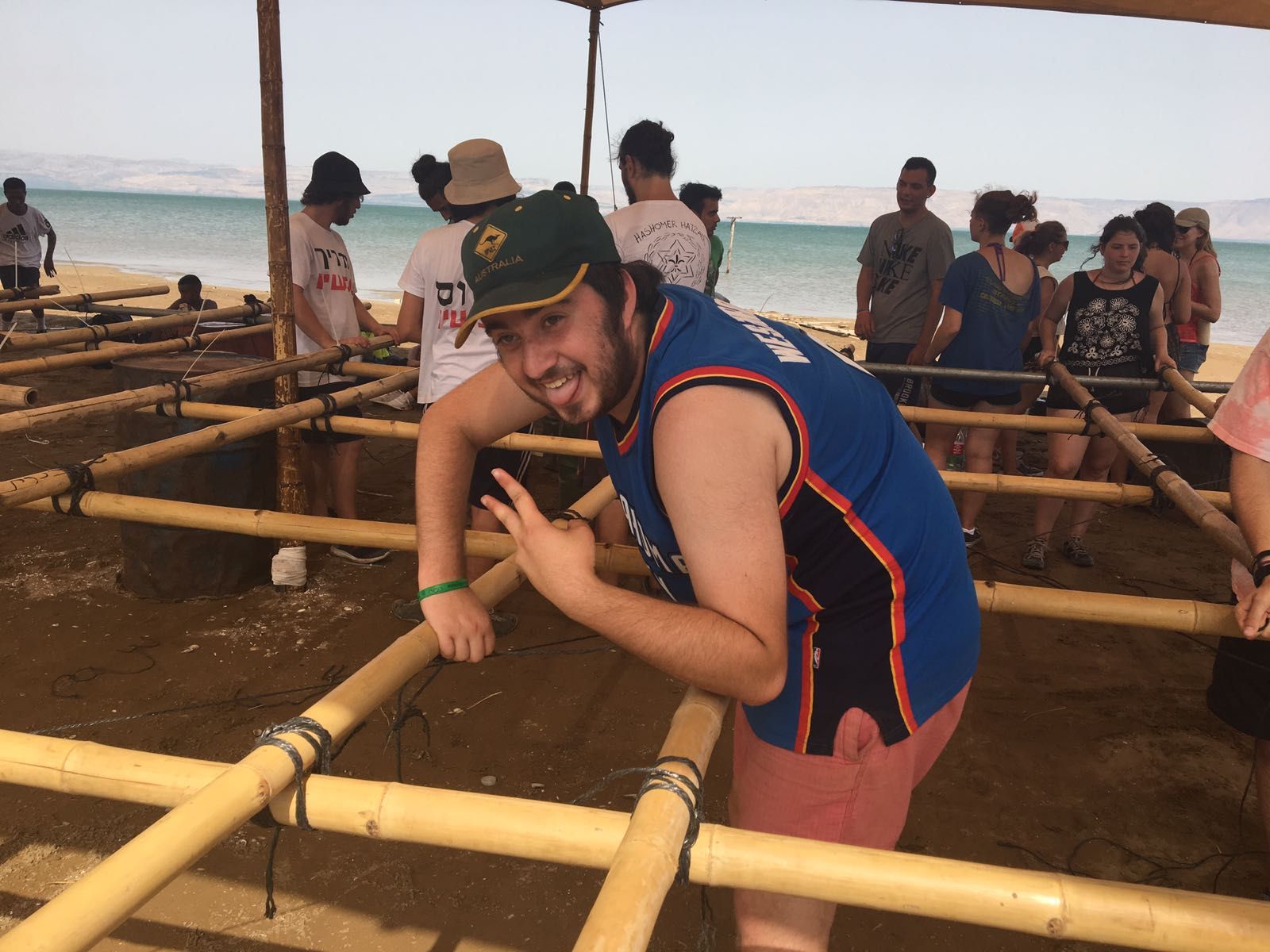 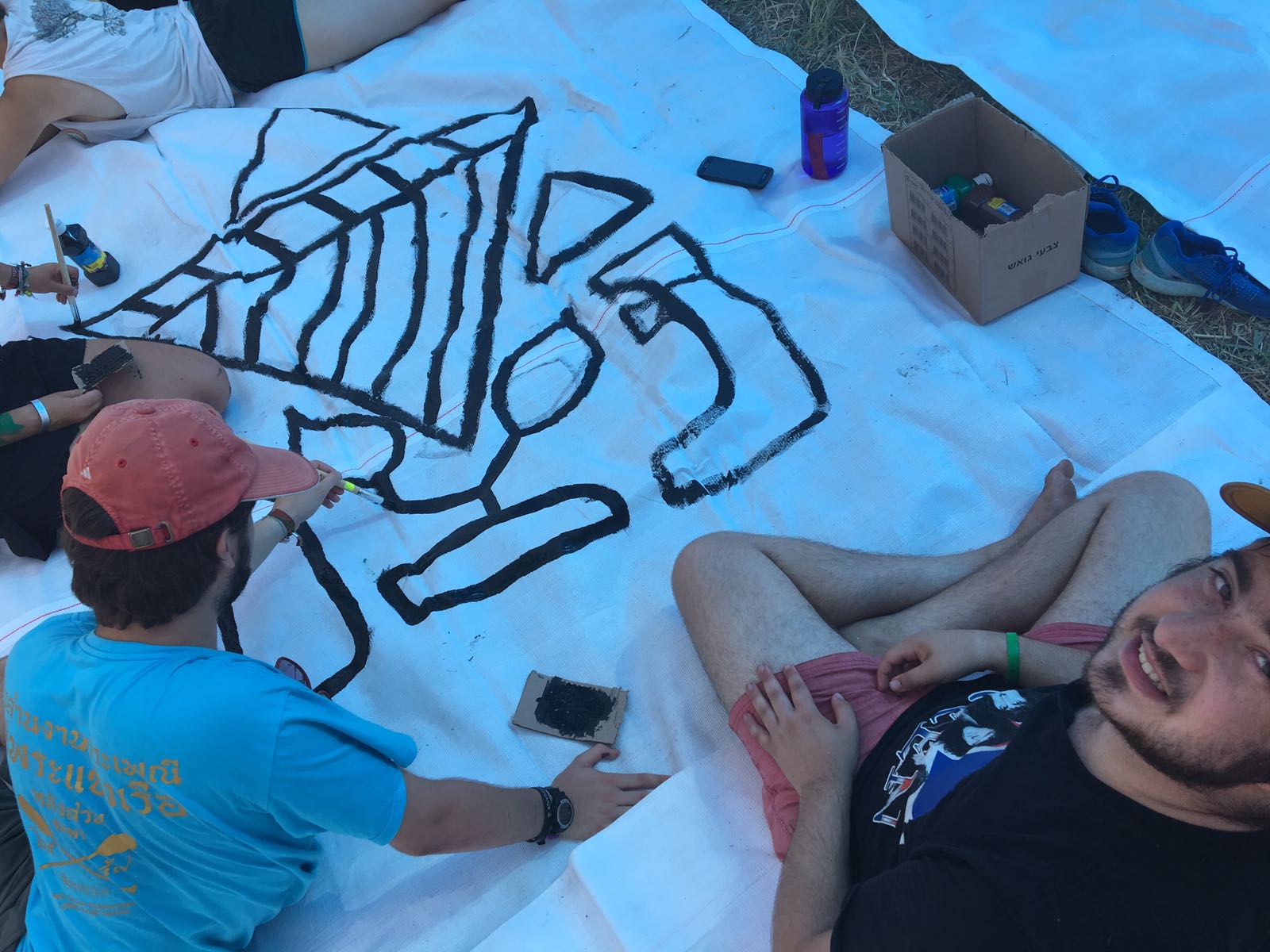 Next week, Netzer summer camps in different places will start, and with it- a few of our shnattim will be able to get some hands-on Hadracha experience. We wish them all the best of luck and hope to hear only good things!

May we all have a relaxing weekend

We've had a busy week here in Tel Aviv. A lot of what we've been up to has been set-up to make sure that the rest of our time here in Tel Aviv is as good as it can be - things like doing the big first food shop, making sure everything in our flats is in working order, having our first assefa as a Southern kvutsah, that sort of thing.

And of course we've been throwing ourselves into our volunteering work as much as possible. We have been volunteering at four different locations so far, all of which are valuable and worthwhile in their own way. The most popular for sure is Elifelet, a kindergarten for underprivileged refugee children. We basically play with the babies and little kids, trying to show that we appreciate and care for every one of them. Sadly, many of them don't get this elsewhere due to their family situations.

We've also been working at a soup kitchen called Lasova, which serves anyone who needs it a healthy, kosher, filling hot meal, no questions asked and of course free of charge. Another place is an animal shelter run by the Israeli SPCA, where we basically walk dogs and play with them. It's awfully sad, though, that the dogs are kept in pens that are so small (two to a pen for the littler dogs), but the people there are doing the best they can with the resources available to them.

The last place is Bialik Rogozin, and Tom Krieser has written about his experiences there. "Our job is to look after a group of about 10 kids within the school's after school care. Over the past week these kids have already have a special place in my heart. They are smart and amazing people, helping them do maths (while rather difficult when you don't speak Hebrew) is really rewarding.

A typical day involves learning about their day at school, having afternoon tea, helping with their homework, and finally some indoor and outdoor kef. I cannot wait to continue my time at this school and see my relationship with all the kids develop."

All of these places pose their own unique challenges and none of them are a cakewalk, but volunteering at any and all of them feels like making a positive impact on the community around us. It's a shame that we've had quite a bit of sickness going around this week, leading to some of us missing volunteering shifts and other opportunities. But ah well, sometimes that happens and we'll take care of each other and ourselves.

Will the Israeli Labor party start fighting for freedom of religion and conscience?

Newly elected Labor party leader Avi Gabbay has made the following public declarations on freedom of marriage, religionization, and public transportation on Shabbat. Will his Labor party finally take a stand?

"Religionization is one of the most serious issues facing Israeli society today. The Education Minister (Naftali Bennett) and his party (Jewish Home Party) use public funds and Israel's education system to support the Jewish evangelization of secular Jews; and are focused on widening the divide between the religious and secular educational systems. I promise to put an end to this."

"I believe that it is the duty of a modern democratic state to grant its citizens the right to marry and to divorce in whatever ways they prefer, and I will work to make this a reality."

Here is a glimple into Netzer Sydney' Winter Camp

It has been exactly 24 hours since we arrived at our campsite and began the wonderful experience called winter camp.

We are happy to report this year we have 96 chanichim (participant) and almost 30 madrichim (leaders) with us on camp!

Yesterday we arrived to the campsite, had our opening program and went to lunch, followed by a few programs in individual shchavot (year levels), dinner and a closing program for the day. The first few days of camp are usually dedicated to getting to now the kids, having them getting to know each other, bonding and forming a Kvutza (a group).

We had a visit from our Canberra shlichim- Raz and Rotem who came to visit the chanichim who came from the ACTJC. As some of you know, we have been working with the closely with the Canberra community in the past few years and it's so exciting to have them with us!

This morning we had a visit from Rabbi Nicole Roberts from North Shore Temple Emanuel who ran a wonderful program to the chanichim in years 8 and 9 about community and togetherness, since the camp is called that in Hebrew.

Today we are looking forward to Rabbi Rafi Kaiserblueth from Emanuel Synagogue program and to the very special Ulpan activity (learning Hebrew) we had prepared to the chanichim.

We hope you are all well and keeping warm as we do here at Netzer Sydney's Machane B'yachad!

See you in a few days, and please feel free to contact me on my mobile if you have any questions.

As mentioned a couple of weeks ago, a Netzer Australia Bogeret just arrived to Israel to study to be a Rabbi at HUC. Eliza McCarroll, the one and only, also has a new blog!!!

A collection of adventures, stories and even pictures from the journey to becoming a Rabbi over the next few years!

B’reshit: “In the beginning” - An Introduction

Welcome, reader, to “The Student Rabbi Chronicles”, and thank you for visiting! Before we get stuck in, I thought it might be a good idea to answer some of the most frequently asked questions I’ve gotten over the last year or so, and, in that way, provide a bit of background to this whole scenario.

Below the cut for more …

Who are you, and what are you doing here?

My name is Eliza McCarroll, I’m 23 years old, from Sydney, Australia, and I’m about to start my first year of studying to become a rabbi at Hebrew Union College - Jewish Institute of Religion (HUC-JIR). As such, I felt like having an outlet where I can document various happenings along this path would be nice, both for myself personally and also for anyone who may be interested in following along.

Why do you want to be a rabbi?

To keep this as short as possible, the idea of becoming a rabbi became increasingly obvious when reflecting about what I wanted to accomplish, where my skills were best utilised, and who I wanted to be as a person.

I spent quite a few years involved both in my home congregation as a teen and and as a madricha (leader) in Netzer, the Reform Jewish youth movement here Down Under, but felt that a job such as a rabbi would be too demanding, too much responsibility, and not something I could ever live up to; in short, I lacked the confidence to even see it as a possibility (and admittedly, some of those feelings remain!).

However, once I finished my time in the youth movement, I realised I was missing the biggest part of myself without a strong way to engage with my Jewish identity. I’d lost a sense of purpose, and finally understood that being in a Jewish framework and undertaking Jewish community work was where my heart lay, and what had been the most fulfilling and meaningful aspects of my life. Nothing had ever made quite as much sense to me the same way that this did.

So, after being pointed in the direction of rabbinical school by my family and community, and after studying in Israel for about a year, everything clicked into place, the applications were sent in, and somehow, someway, here we are!

Wait, what? Women can be rabbis?

Still fairly common to hear where I come from, so, to clarify, I am very fortunate to be a part of the Reform (liberal/progressive) Jewish movement, where women have been able to be ordained as rabbis for the last 40-odd years. In short - yes, of course we can!

What do your family think?

My family have been extraordinary - in fact, it was their idea - and I’m beyond lucky that they are so supportive!

How long is your course?

Five years total! The first year takes place in Jerusalem, Israel, where I could not be more excited to be moving back to in about 2.5 weeks time - whoa! The next four after that will be in the United States - Cincinnati, Ohio, to be exact - which is not really a place that a girl from Oz really ever expects to end up in her life, but definitely looking forward to it!

Any other questions? Just ask!

We will stay tuned!!!

In the Parashat Hashavu'a corner, we will direct you to the World Union for Progressive Judaism's column "Torah from around the world", where each week another Progressive Rabbi writes about the weekly portion. For this week's portion click here.

Check this out! Pride Parade in London!