This week was absolutely packed- so much went on, that it is hard to keep track. The three major events that took place were-

Below you can read more about how the shnattim experienced this week.

Next week is another very unique week in Israel, remembering the fallen soldiers and victims of terror. Right after that day, as the sun sets, we start the celebrations of Israel's 69 birthday. This is something that is very hard to grasp and to digest- there are mixed feelings of sadness and joy, happiness and grief. This may be even more difficult to comprehend for our shnattim, but this year, they will be guided through this process, joining the key events with the staff, explaining the ins and outs of things.

May we all grow and learn how to have both sadness and happiness in us, learn how to embrace what we have and fight for what we believe in.

As part of the communal living on Etgar, the shnattim made a decision to shop in a social co-op, where they also volunteer since the begining of Etgar. In the past week there has been a crisis in the co-op, and not enough volunteers to run it. Jess and Elinor both volunteered immidiately to go and help. Yeshar Ko'ach!

Our shnattim making falafel as part of their Hebrew lesson with Eli, and having fun together 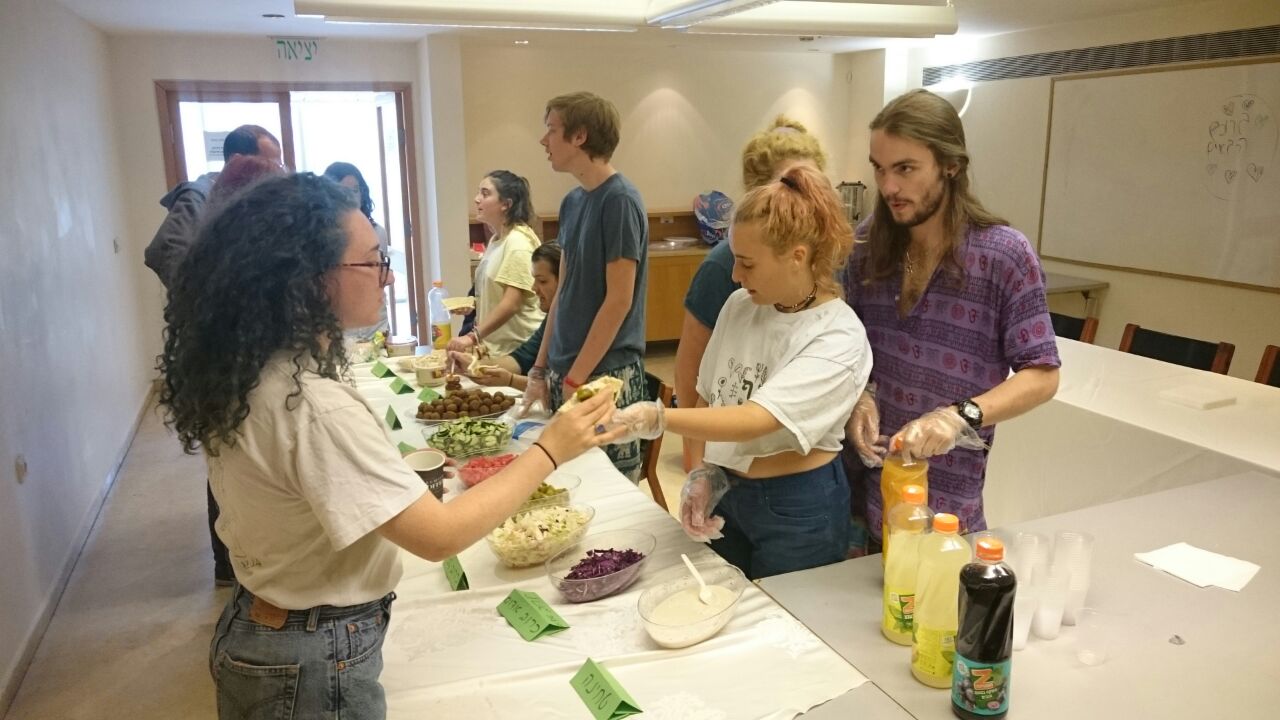 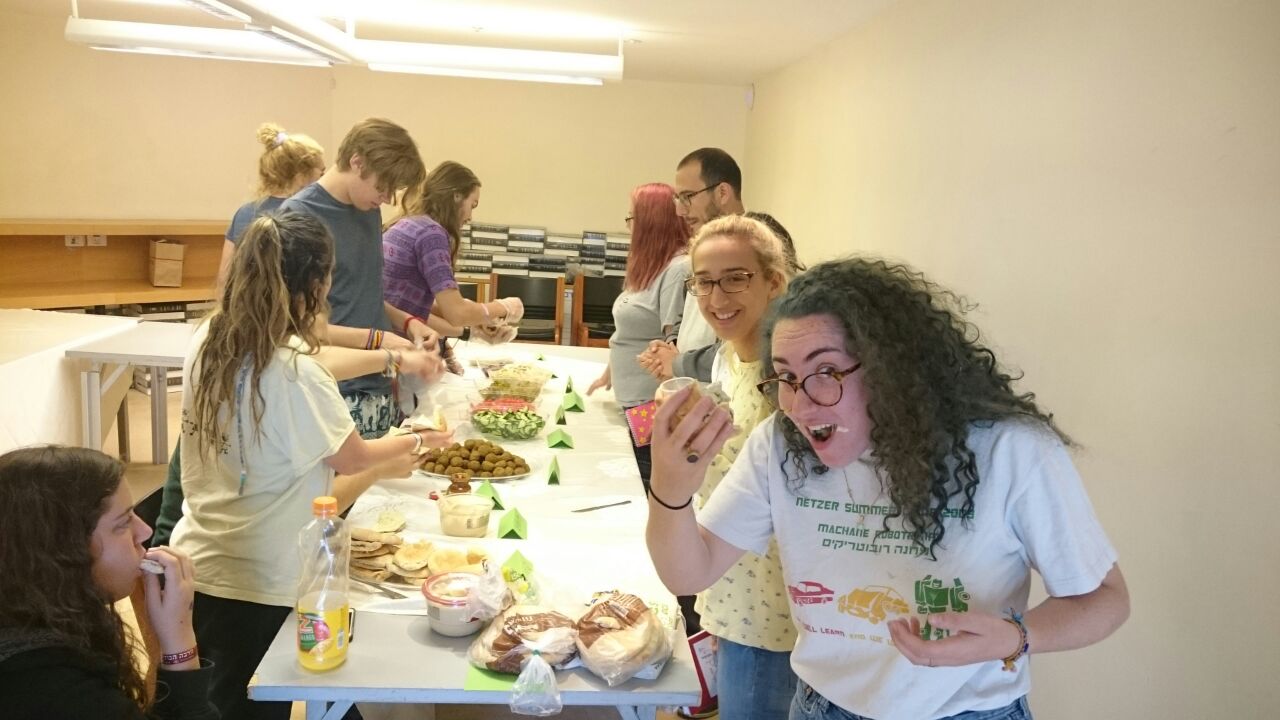 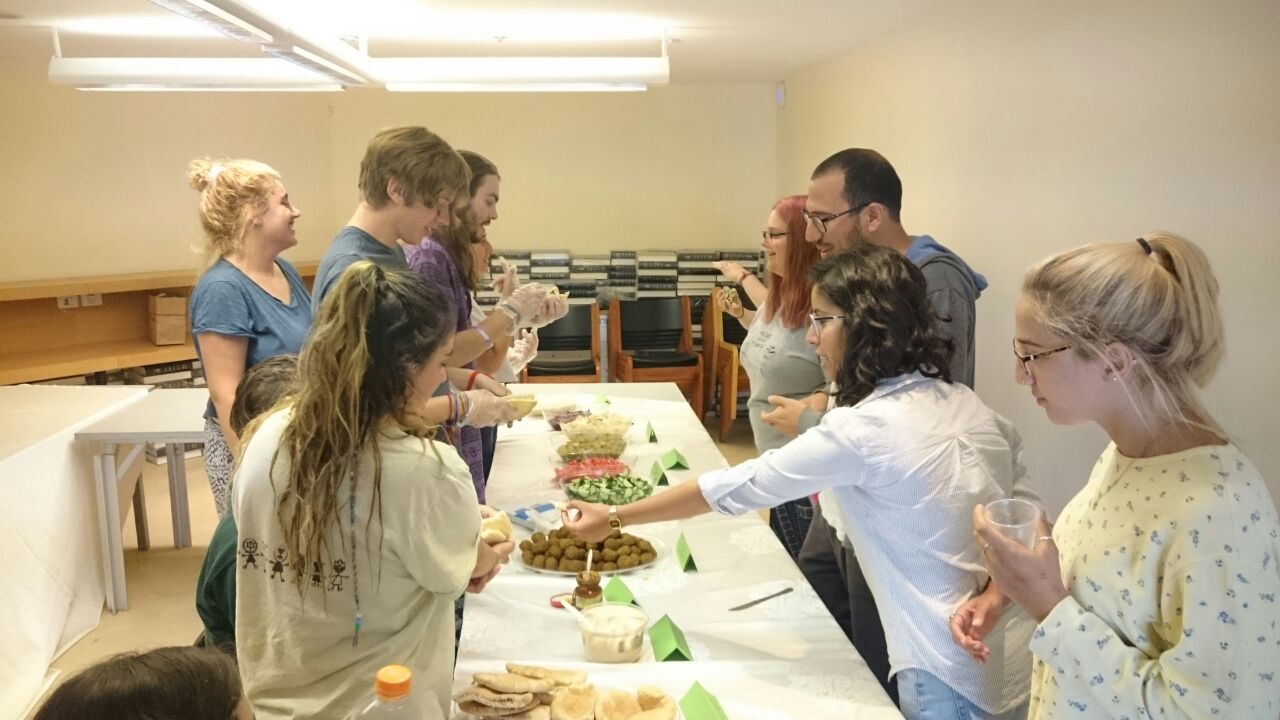 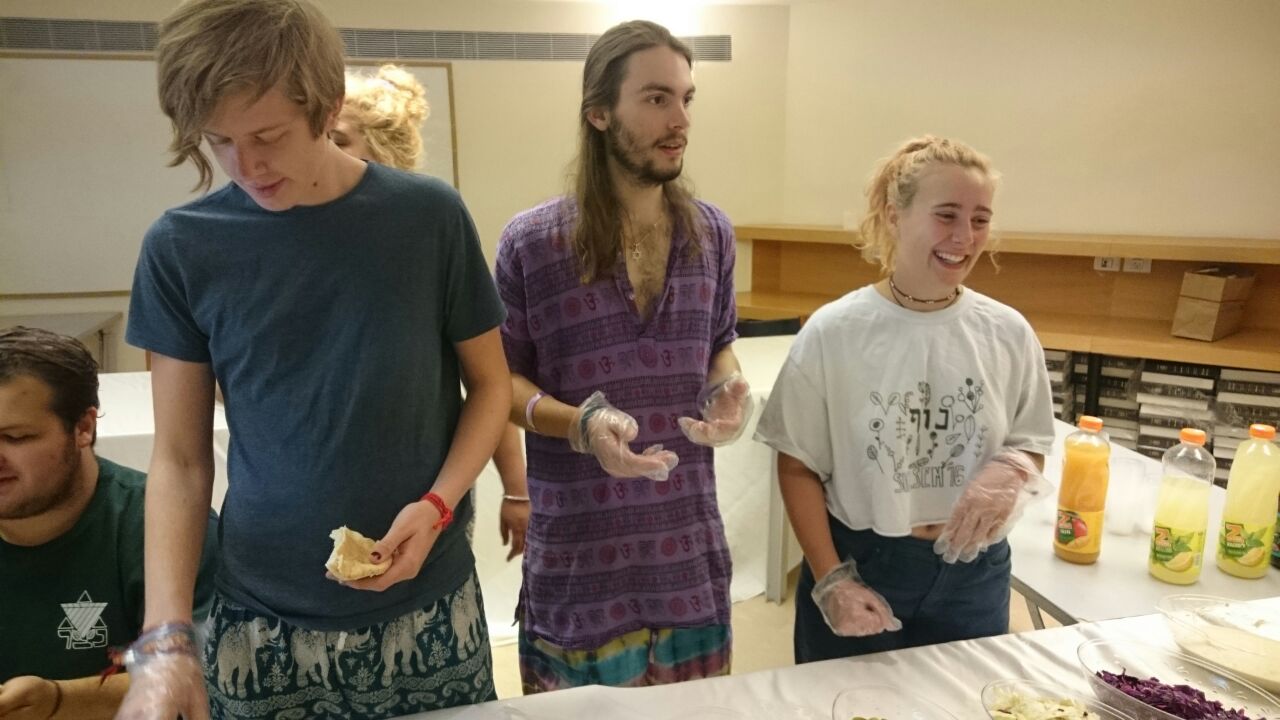 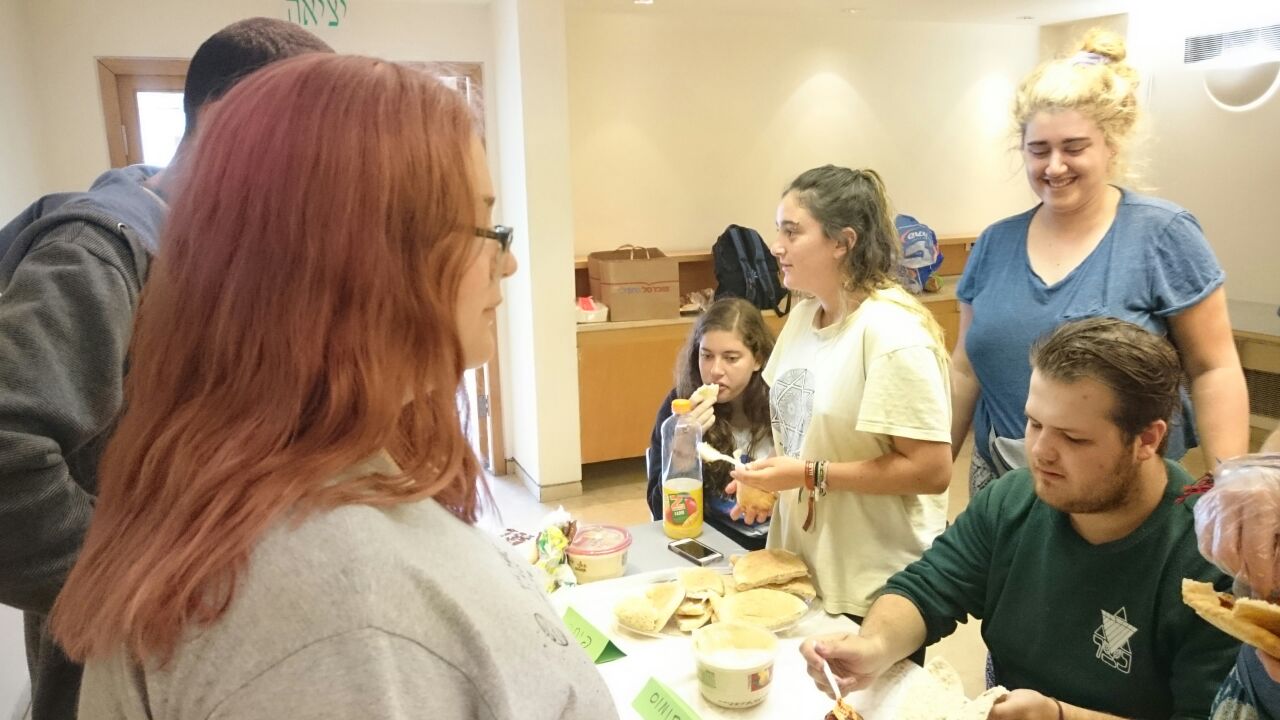 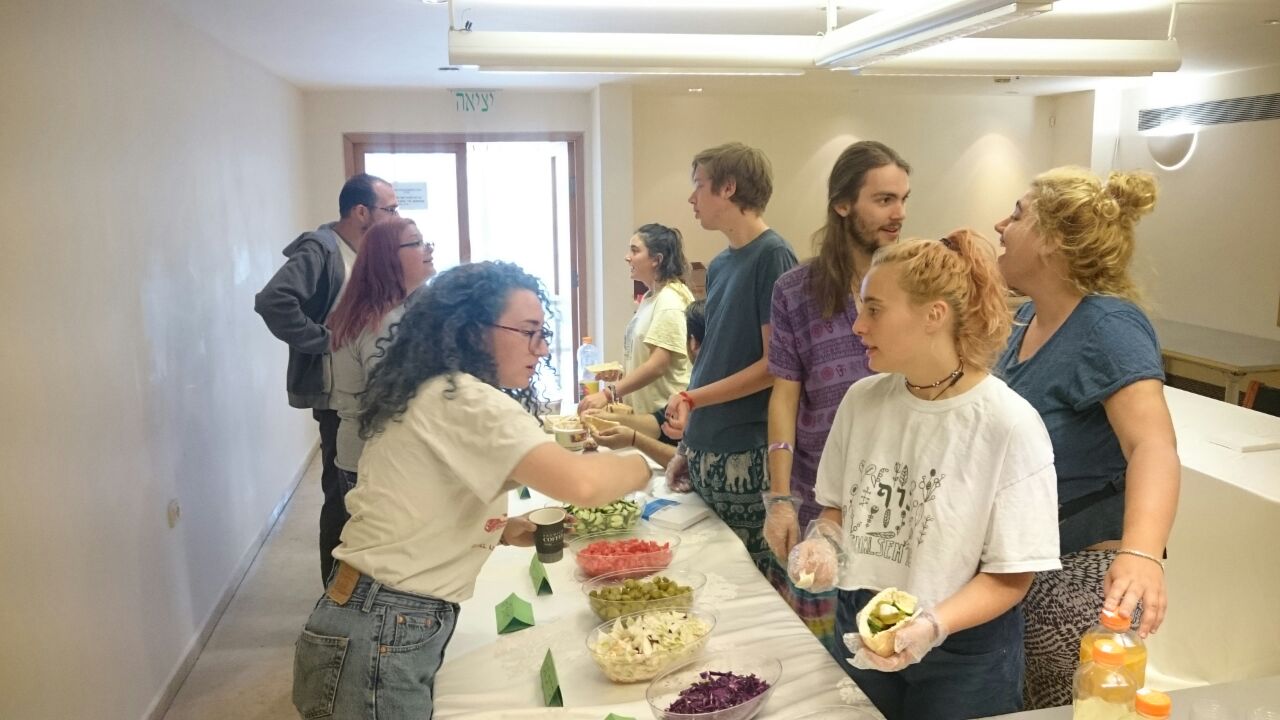 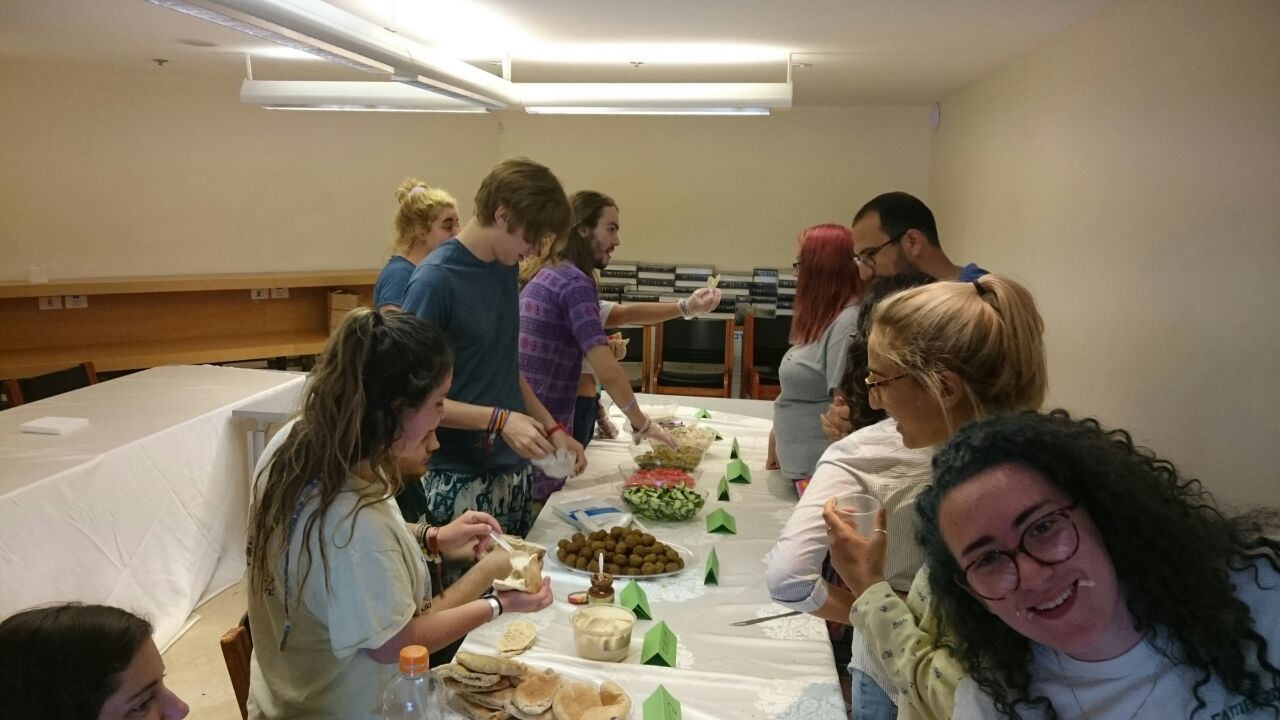 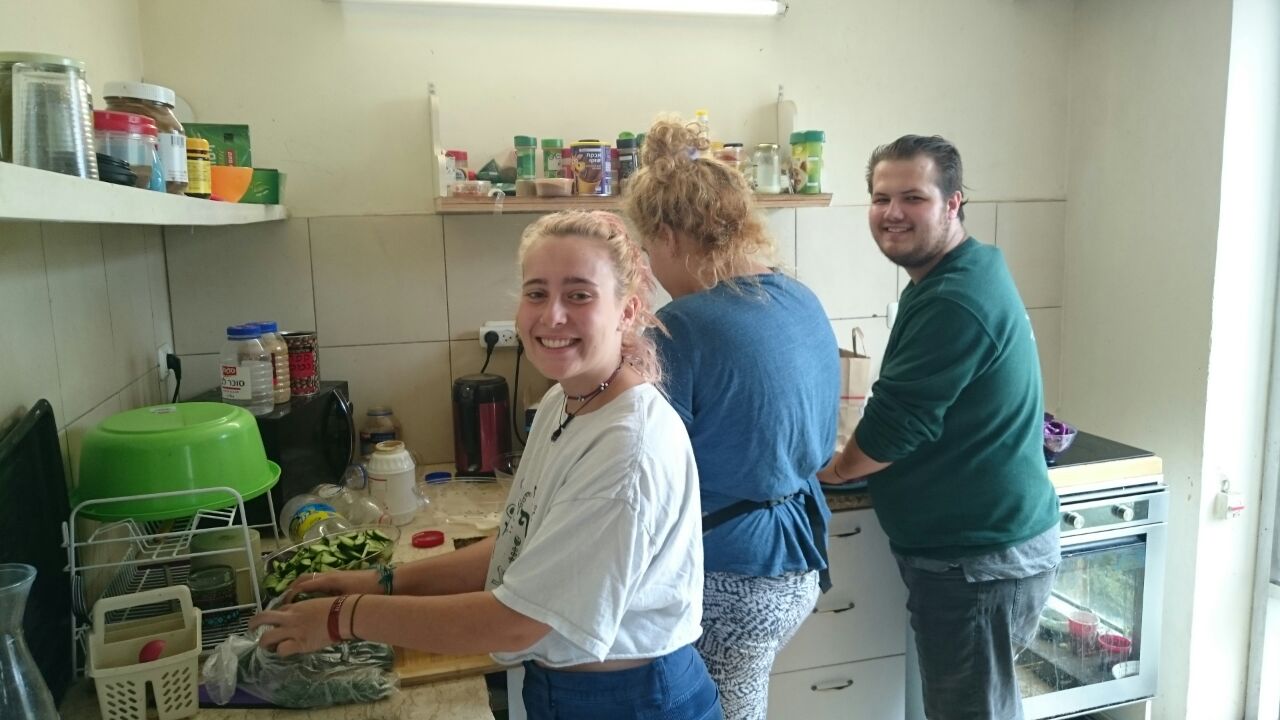 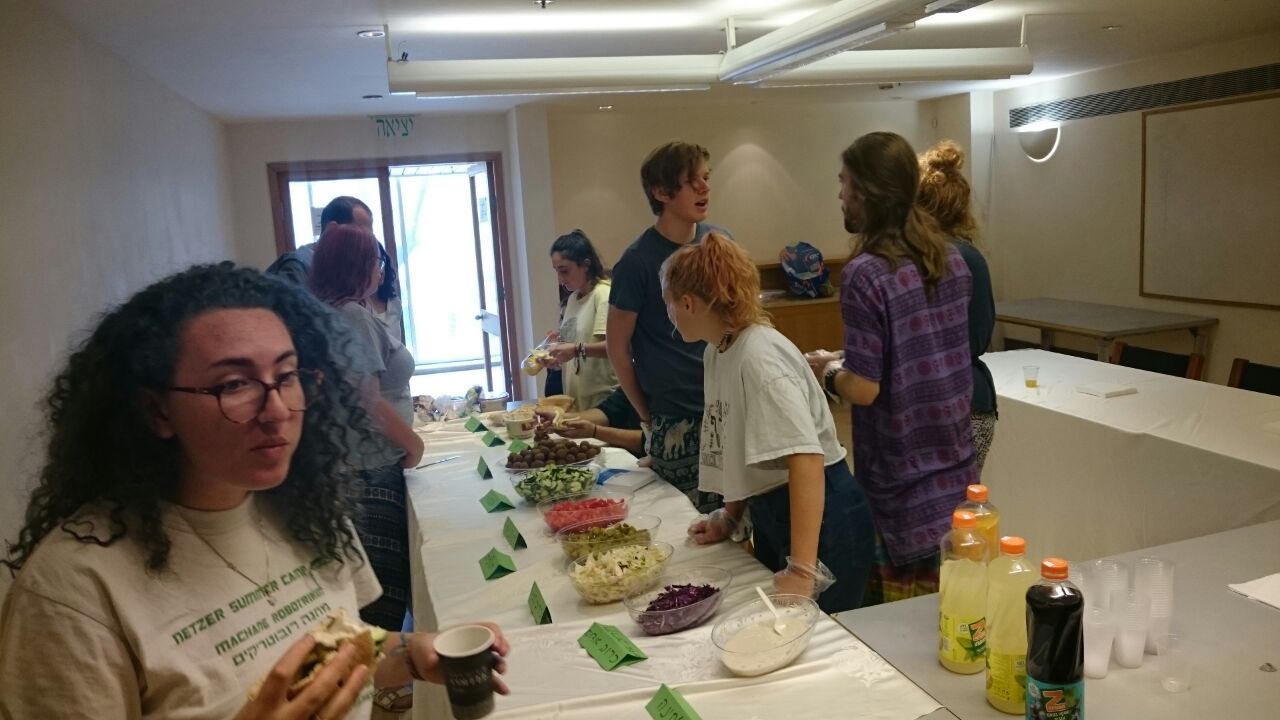 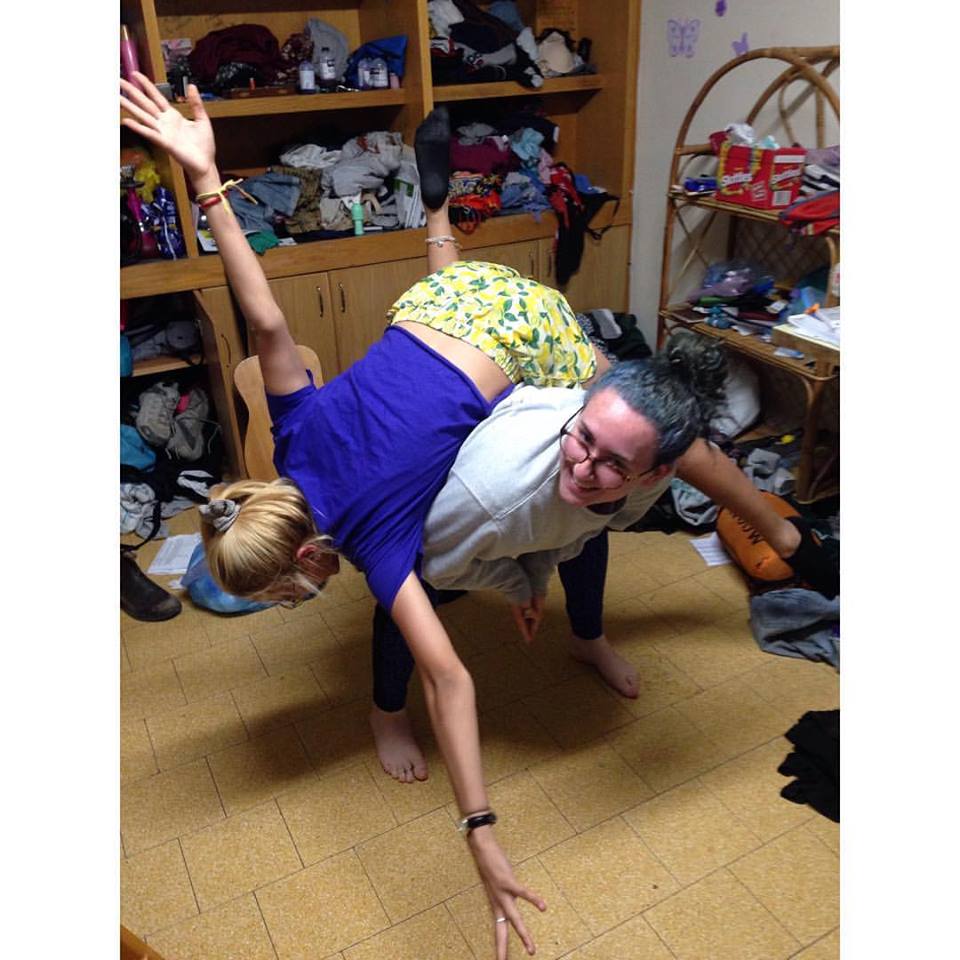 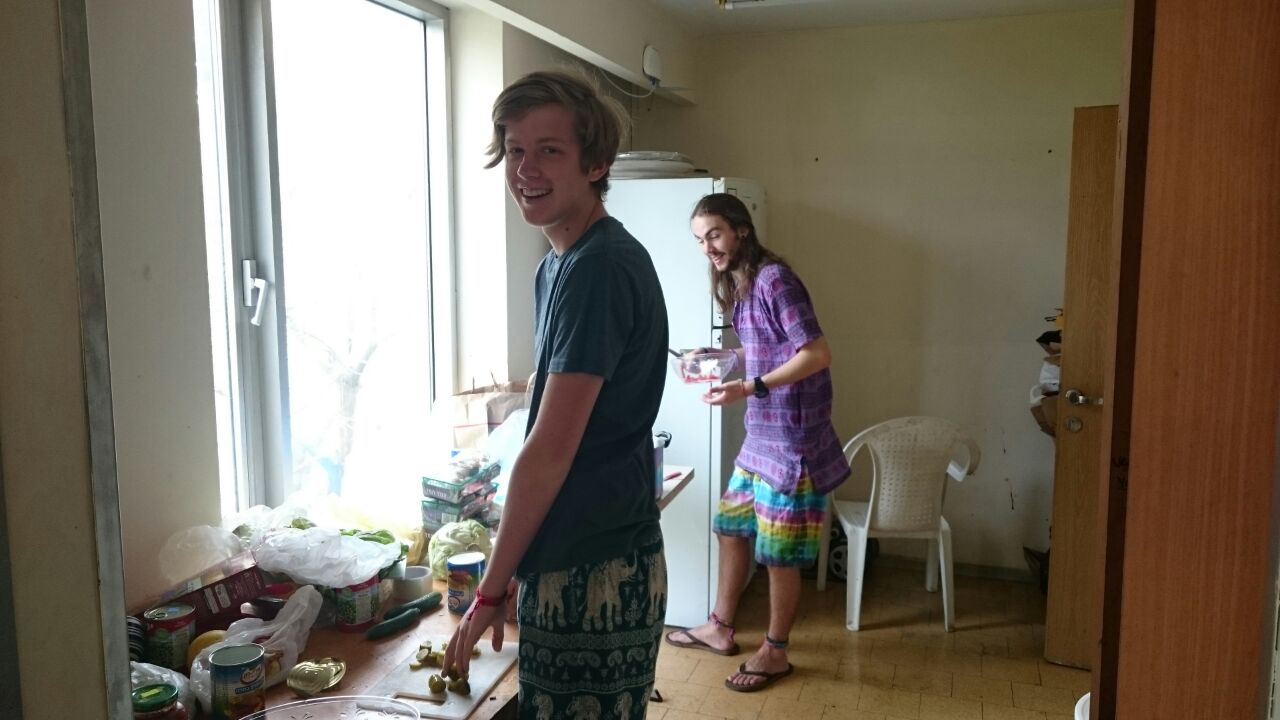 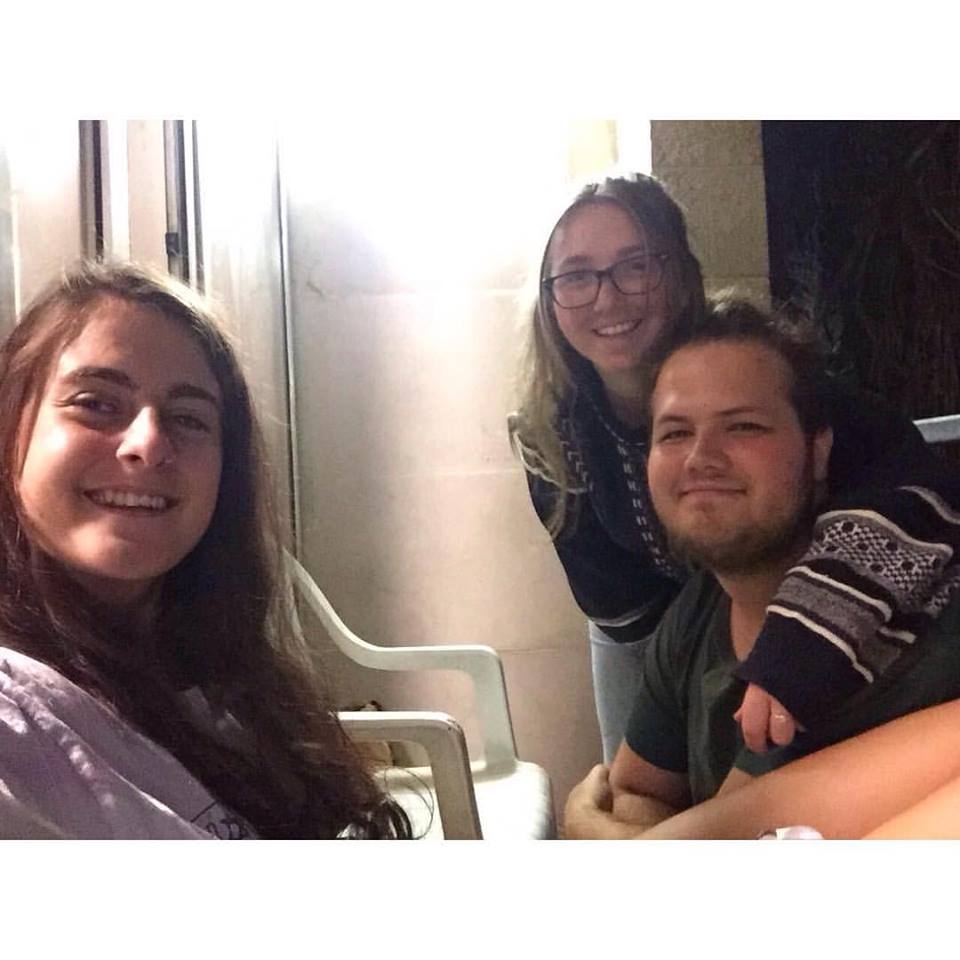 We have had a really busy schedule this week on Machon. Sunday was Erev Yom HaShoa and we were lucky enough to be invited to a Holocaust memorial ceremony at Yad Vashem. At the ceremony we heard words from Bibi Netanyahu (The Prime Minister of Israel) and Reuven Rivlin (The Israeli President) which was a massive privilege for us. Despite the fact that it was freezing cold many of us listened from the toilet as it was the warmest place there.

Also I am very pleased to announced to all of you that on Sunday night Arsenal beat Manchester City 2-1 at Wembley to secure a place in the FA Cup final!! It’s not been a great season for us but this could be the silver lining we needed and a great way to send Wenger off.

Monday was Yom HaShoa and we started off with a programme ran by a few Machoniks; it involved hearing testimonies and lighting candles. At 10am the siren went off and we stood in silence. We were inside during the silence which prevented us from seeing the whole community at a stand still, although next week for Yom Hazikirion we hope to do it outside. Later that day I was surprised to see the return of our favourite Noamnik, Noah Libson. This could only have meant one thing… we were watching Denial!

Tuesday we went to Har Herzl for our Yom Israel where we visited many graves and heard their individual stories. We went to Jabotinski’s grave and there Beitar ran a tekkes (ceremony) for us, It was like nothing i’ve ever seen before and many of us found it quite weird, but it was something new to experience.

On Wednesday we spent the majority of the day at the Hebrew University at Mt Scopus. Rodrigo gave us a tour of the university and we learnt the connection between Hebrew U and Zionism. After an amazing lunch we were told of our task for the rest of the afternoon; for a lot of us this was a nightmare come true, we had to talk to students and ask them questions regarding zionism and why they’re here. It actually went really well and to our shock we found many people who identify as non-zionist. We returned back to Kiryat Moriah and had the pleasure of meeting an ex-shnattie from 2006 who made Aliyah from Argentina.

It’s been hard to write about the week as we have done so much, there were so many more things I could have talked about but I have just highlighted the things that stuck out the most .

From Tel Aviv to Jerusalem to New York, BINA (The secular Yeshiva) is creating new meaning for Yom Ha'atzmaut (Israeli Independence Day). We are building new ways to mark the day, highlighting the importance of Judaism AND Democracy for the future of Israel and the Jewish people, and generating new relevance for Israel's Megilat Haatzmaut (Declaration of Independence) the secular-sacred document that established Israel as a Jewish AND Democratic state.

If you are in Tel Aviv, Jerusalem, or New York, please join us as we commemorate 69 years of Israel and 69 years of striving toward Jewish-Democracy. And wherever you are, we encourage you to add meaning to Yom Ha'atzmaut by re-reading and re-interpreting Israel's Declaration of Independence with BINA's "We Declare" materials. Or contact us to have BINA organize a Yom Haatzmaut event in your community next year! Chag Haatzmaut Samach! Happy Festival of Judaism and Democracy! The BINA Family

UN secretary-general: Denial of Israel’s right to exist is ‘modern form of anti-Semitism’

Speaking Sunday night at the World Jewish Congress’ Plenary Assembly in New York, Guterres said he could not control all expressions of bias against Israel at the United Nations. But he said Israel has the right to be treated like any other U.N. member state. “A modern form of anti-Semitism is the denial of the right of the State of Israel to exist,” Guterres said. “As secretary-general of the United Nations, I can say that the State of Israel needs to be treated as any other state, with exactly the same rules.”

Israeli and U.S. officials, along with supporters of Israel, have long accused the United Nations of irredeemable bias against Israel. According to U.N. Watch, a pro-Israel group that monitors the international body, the U.N. General Assembly condemned Israel 20 times in 2016, compared to six condemnations for the rest of the world combined.

But Guterres emphasized that treating Israel fairly “does not mean I will always be in agreement with all the decisions made by any government position taken by any government that sits in Israel,” but adding he supports “the absolutely undeniable right of Israel to exist and to live in peace and security with its neighbors.” He also advocated the establishment of a Palestinian state.

The secretary-general, speaking ahead of Holocaust Remembrance Day, called the Holocaust “the most heinous crime in the history of mankind” and promised to marshal the U.N. to eliminate anti-Semitism.

“You can be absolutely sure, as secretary-general of the United Nations, I will be in the front line of the struggle against anti-Semitism, and to make sure the United Nations is able to to take all possible actions for anti-Semitism to be condemned, and if possible, eradicated from the face of the earth,” he said.

Speaking the same day that right-wing populist Marine Le Pen advanced to the final round of France’s presidential election, Guterres decried rising anti-Semitism in the United States and Europe, which he said was fueled by populism.

“We see today anti-Semitism alive and well,” he said. “We see it in acts of physical aggression, murders of Jewish people in different parts of the world, destruction of property, destruction of monuments, destruction of centers. And very unfortunately we have seen the multiplication of forms of populism, of xenophobia, of hatred.

In the Parashat Hashavu'a corner, we will direct you to the World Union for Progressive Judaism's column "Torah from around the world", where each week another Progressive Rabbi writes about the weekly portion. For this week's portion click here.

This is not the usual Shabbat treat, but is heartwarming. This week we commemorated Yom Ha'sho'a- the memorial day for the Holocaust and heroism during the Holocaust. In Israel, we took the Etgarniks to see, hear and feel the two minute siren that is on at 10:00 in the morning, every Yom Sho'a.

So it happens that we were documented in at least two foreign news coverage- one in Germany and one in Brazil. Check this out- ZEIT in Germany and ISTOE, Brazil . We are quite easy to spot!

And on roughly the same time, in another part of the world, the March of The Living took place, where Netzer representatives from RSY- Netzer (UK), LJY- Netzer (UK) and Noar Panama came together.

So maybe this is not a "treat", but it is an honor and a privilege.