This week was the last week of the group on Kibbutz Lotan. I feel comfortable saying this is a once-in-a-lifetime experience- while 18 year olds can certainly go volunteer as a group, or study as either individuals or as an intentional community, living on an ecological, ideological, Progressive Kibbutz in the Israeli desert- this is just unique. Add to that the fact that the group is living in mud domes, creating their own bio-gas, cook with solar-ovens- you get a once-in-a-lifetime experience.

The coming Shabbat is going to be a closed one, and is peer-led Shabbat planned by Emma, Becky and Asha. It is quite amazing that such a short time after arriving on the program, the shnattim are given this responsibility to run their own Shabbat- we know it will be a great one!

On Sunday it will be time for the group to say farewell to the Kibbutz family, and travel to the Galilee-the Northern part of Israel, for their Tikkun Period. This part is done in collaboration with the United Jewish Israel Appeal (UJIA), the Jewish Agency and P2G. This will be their time to get to know a different part of Israel, see different communities and volunteer. We wish them and us the best of luck as the journey continues! 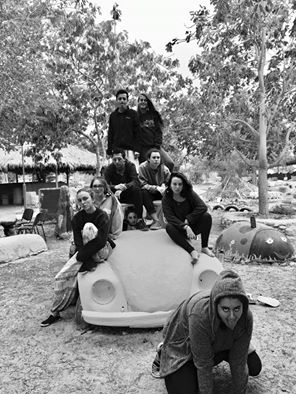 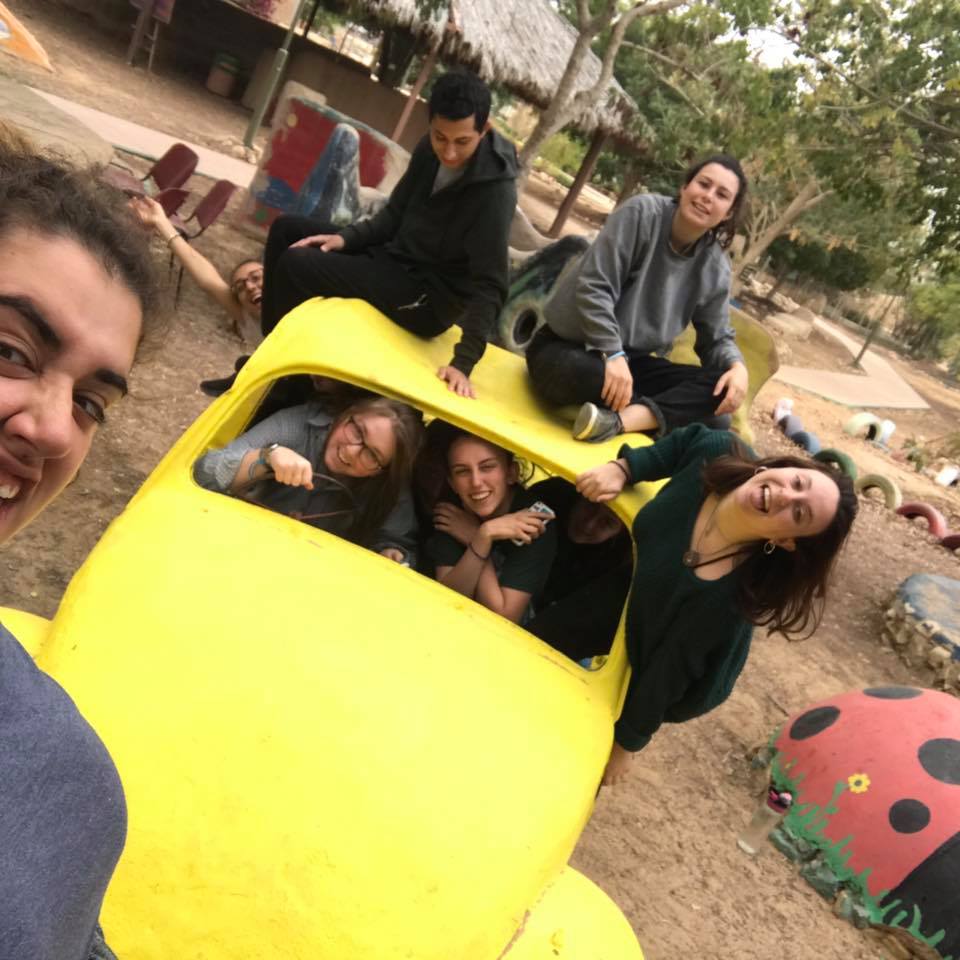 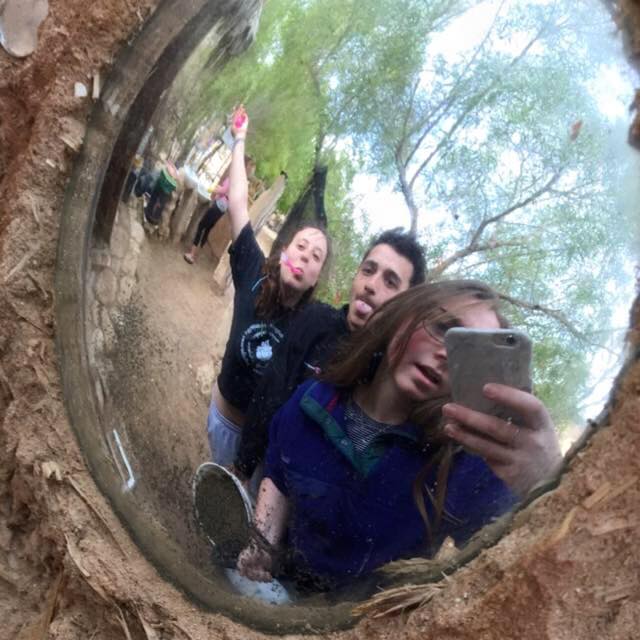 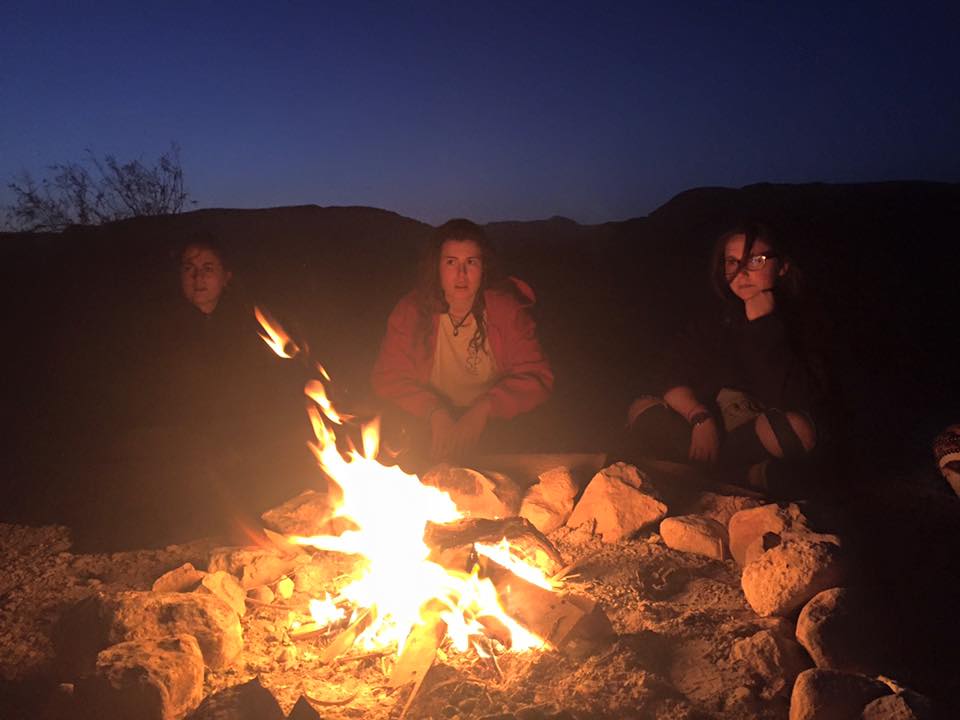 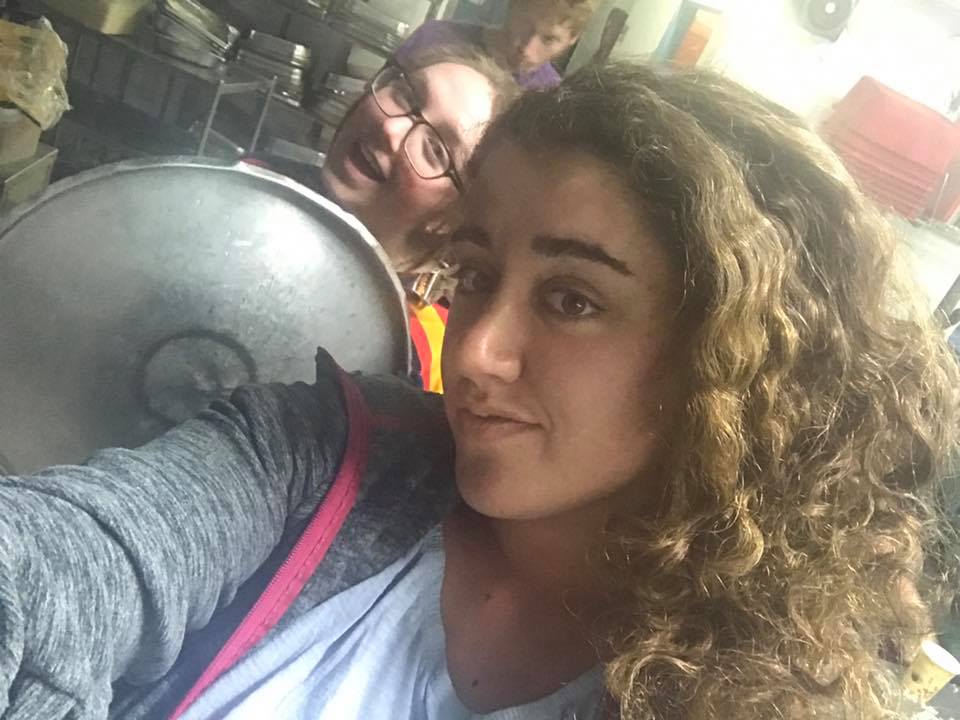 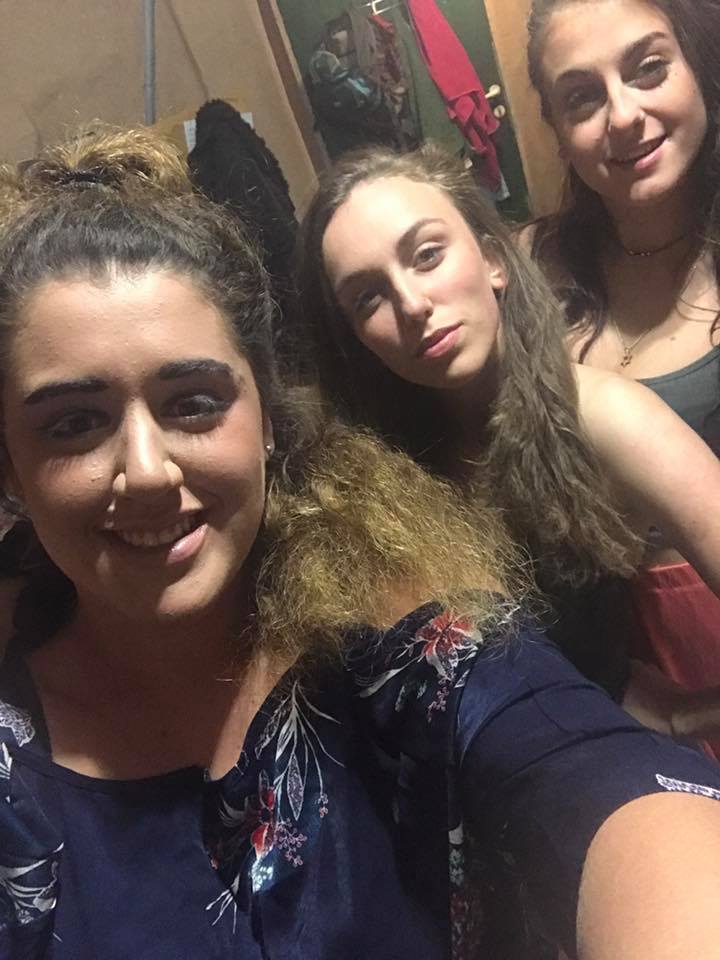 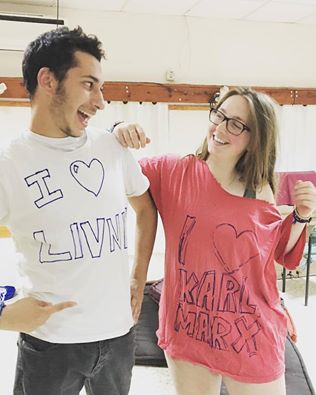 Weekly update by Ilana and Josh

Thursday began in its usual way, ulpan class with some practical gardening with Adam. We then had an interesting discussion with Michael Livny about Tikkun Olam and how we as individuals can incorporate these ideas into our daily lives back at home.

Shabbat was a highlight for many as went to our host families for a lovely hot meal, after a day of relaxing and watching movies.

Our week commenced with a session about composting worms, in which we were able to look at the worms Lotan uses to compost a lot of its food scraps. Later, we continued to work on our Hebrew in Ulpan and made a delicious meal for the whole kibbutz. This was followed by a relaxing Kundalini yoga session with Debbie; this gave us a chance to prepare our minds for the week ahead and the prospect of leaving Lotan. It was a nice juxtaposition to the usual manual activities or lectures, giving us a chance to have a giggle and a stretch as a group.

Monday morning saw us completing the mud wall we have been building for the kindergarten over our time on Lotan. It was really nice to see this project through, from slapping mud mixed with straw onto a thin wall, to adding the oil coat to waterproof the structure. This has been extremely rewarding as we have been able to give something permanent to the kibbutz while having hours of fun and mud fights over the past weeks.

This week Adam taught us about how to build a basic dome structure, like the ones we have been living in this month. This culminated in us building a model dome out of wooden poles and screws. He also taught us how to use taboonim (fire ovens) so that we could make homemade bread – some turned out to be delicious while others were not so great. We walked away from this with key cooking skills and a pile of flour-covered laundry to do!

A peula about Israeli politics gave us all a base line understanding of the country we are living in, and an appreciation circle with Mark brought us all together into a space where we could process our time here and think about how much we have bonded as a group so far.

This week we learnt from one of our key educators, Alex about the Wadi El Naam project. This project was to build a medical centre in a Bedouin community within the Negev, with the help of Lotan members to make the project environmentally friendly. This was extremely interesting as we learnt about the Bedouin culture and how different groups of people reacted to the medical centre. The women were less keen on this project as it meant that they would no longer get the chance to be driven into bigger towns for some rest bite from daily life and instead they would have to walk up to 2km with their sick children to reach this new clinic. Unfortunately after many years of renovations and various nurses coming and going, the clinic has been vandalised and abandoned. From this talk we learnt many things including the fact that whilst a project may seem extremely beneficial in theory, cultural differences could lead the project to premature failure.

Once again this Wednesday we headed over to the date fields to spend some time forming the cut branches into rows for tractors to chop up finely to use as part of the fertilisation process for the trees. Whilst this job is monotonous, we make our own fun in the fields. This week we were particularly entertained by a group of donkeys in the area! And we used this opportunity to take a half hour break to have a mini photo-shoot with them in search of a profile picture worthy shot. But it’s not all fun and games, we actually worked so hard we ended up finishing early. So we were able to take a ride on the crane which is used to reach the very top of the date trees. Whilst flying high above the date trees, we were able to see all of Lotan and even farther away to some other kibbutzim!

It’s been another great week for Shnat Nof. We will be sad to say goodbye to the amazing Lotan but we are looking forward to moving on to Ma’alot and continuing to make memories and experience new things as our year continues.

A plane drops fire retardant on a forest fire in Nataf, near Jerusalem, Photo credit: EPA

Numerous firefighting teams, assisted by military firefighters and aircraft have been battling the flames since Tuesday.

Israel Fire and Rescue Services said Thursday that 220 fires were recorded nationwide over the past two days, 189 of which were brush fires. The department announced a state of emergency on Wednesday, resulting in a nationwide call-up of all personnel and volunteers.

Public Security Minister Gilad Erdan said he believed the state of emergency will remain in force until at least the middle of next week.

Netanyahu thanked the countries coming to Israel's aid, tweeting, "Thank you to Russia, Greece and Croatia, which are sending firefighting planes to Israel to help our firefighting efforts."

The early hours of Thursday morning saw firefighters get under control the massive blaze ravaging parts of the northern town of Zikhron Yaakov, where 3,000 people were evacuated from their homes.

Firefighting teams, however, had no reprieve, as massive fires threatened the outskirts of Jerusalem and Haifa.

Highway 443, which links Jerusalem and Lod, was temporarily closed on Thursday as flames reached the city of Modiin.

Dozens of firefighting teams continued to battle the fire threatening Nataf, north of the capital. Strong winds were pushing the fire, which broke out on Wednesday morning, west, toward the neighboring community of Neve Ilan.

Over 40 firefighting teams were battling the flames on the capital's outskirts. Clearly visible from Highway 1, the main artery linking Jerusalem and Tel Aviv, the wind-whipped blaze threatened strategic power and water facilities in the area.

A large gas station at Shaar Hagai, a major junction on the Jerusalem-Tel Aviv highway, was shut down as it is in the fire's projected route. Special precautions were being taken to protect the station's gasoline depository, as well as a nearby chlorine depository used by Israel's national water company, Mekorot.

A brush fire threatened three buildings near the Orot Rabin power station in Hadera Thursday. The fire, suspected as arson, was extinguished before it reached the compound.

A fire department official said evacuees would most likely be able to return to their home by Thursday evening.

Firefighters were able to extinguish the blaze threatening the Lower Galilee community of Gilon, where 250 families were evacuated, but the families would not be able to return home before Friday, he said.

Netanyahu, Erdan and Police Commissioner Roni Alsheikh visited the fire departments' command center in northern Israel Wednesday evening, and were briefed on the investigation into the fires. "Almost 50% of the fires are apparently arson," Erdan told Army Radio on Thursday. He said the police was bolstering deployment in open areas nationwide to generate deterrence and help fire detection efforts.

The Israel Movement for Reform and Progressive Judaism (IMPJ) issued the following statement: On Thursday, November 24, 2016, Beit Samueli - Kehillat Ra'anan in Ra'anana woke up to a shocking sight. Overnight, hate messages were spray-painted on the congregation's building, including supposed Halachic orders on when one is allowed to murder, as well as knives with the names of Rabbi Rick Jacobs, President of the Union for Reform Judaism (URJ) in North America, Rabbi Gilad Kariv, President and CEO of the Israel Movement for Reform and Progressive Judaism (IMPJ) and Anat Hoffman, Executive Director of Israel Religious Action Center (IRAC) and chair of Women of the Wall, written on them in red ink.

Over the past year, Reform Jews in Israel have increasingly served as targets for hate speech and incitement, but today the problem reached a new level. Yossi Cohen, Director of Kehillat Ra'anan, who was the first to arrive at the scene, said: "Upon arriving this morning at my second home, Beit Samueli-Kehillat Ra’anan, I was horrified to find that once again Reform Judaism and Kehillat Ra’anan are being persecuted and attacked… the incitement against Reform Judaism in Ra’anana continues to escalate as this is the fifth time the congregational building has been spray-painted with hate speech – but seeing the knives was shocking and I am still shaking… I pray that the leaders of the incitement, among them leading rabbis, understand the consequences of their uncontrollable words.”

Rabbi Gilad Kariv, IMPJ President and CEO, responded: "Death threats and the vandalizing of a synagogue are the direct result of an unprecedented series of incitement against Reform Judaism over the past year led by leading ultra-Orthodox rabbis and politicians. We hope that this event serves as a warning for those people and reminds them how a disagreement should be handled. We will not be frightened by these threats and will continue promoting our activities at the Kotel, in the city of Ra’anana and in dozens of congregations spread across the country.

צֶדֶק צֶדֶק, תִּרְדֹּף - Justice, justice you shall pursue. The IMPJ honors the right of all people to worship as they deem fit, while respecting each other in doing so. We will continue fighting these phenomena in the way we know best, by promoting religious freedom and tolerance and democracy all across Israel.”

For more about the incident, read this article in Ha'aretz.

In the Parashat Hashavu'a corner, we will direct you to the World Union for Progressive Judaism's column "Torah from around the world", where each week another Progressive Rabbi writes about the weekly portion. For this week's portion-

This week needs a sweet song to finish it! Here it is-